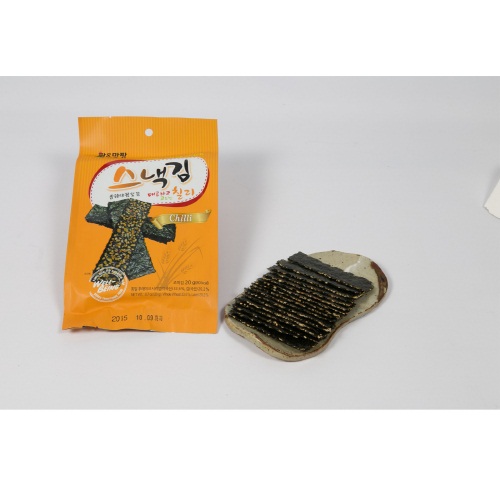 상세설명 안에 있는 이미지가 정상적으로 보이지 않습니다.
이미지 경로를 단순하게 하여 재수정 부탁드립니다.
Product Description
Healthy between meals, munchies easy to enjoy eating, Farm&matzzang snack laver
Convenient and nutritious between meals! It contained exactly laver's nutrition and nuts' aromatic taste.
It is made of laver with rich vitamin and protein, and almond helping the development of growing children, so it is enough for one between meal.


Taste is added by sweet Teriyki going well with laver
You can enjoy the taste of almond or chili according to your taste.

Shipping from : Republic of Korea
GSTK

www.gstk.co.kr Seller_Mail
Introduction
Since the foundation of Kia Trading Co, Ltd (change of corporation name to GS TK Co, Ltd. in 2011) in 1999, we have produced soaps and cosmetics and have been exporting them to Taiwan, China, France, and the USA including Japan. As a result of over 10 years of research and 6 years of patent work, we released a shampoo type of Eron Healing Tonic, which obtained a patent (patent name: shampoo for hair loss prevention and hair growth promotion) in March, 2012 from the KIPO, and license as a quasi-drug from the KFDA, and went through the US FDA safety inspection and registered as a FDA OTC (Over-The-Counter) drug. Also, We are exporting products that have been selected as one the HIT500 Products of the small & medium size enterprises. The Company has planned and developed 6 types of 3D mask packs under the “Meechaeyeon” brand in 2013. In 2014, its food business department has created handmade stir-fried red pepper paste (mixed with beef, pollacks and anchovies) and handmade lever made from seaweed fusiforme (developed and produced for the first time in Korea’s history). In 2015 under the product brand “Farm and Matzzang”, the company planned, produced and launched a variety of laver including almond-flavor laver, chili laver, gold honey citrus extract and seasoned laver (such as mini laver and salted and dried laver) and Korea Ginseng D to sell in duty-free shops in airports and to sell overseas markets (America, China and etc). (Snack laver, stir-fried red pepper, seaweed fusiforme and Korea Ginseng D are all registered to U.S. FDA and have all passed heavy metals residue tests.) • U.S FDA Test Passed/HACCP Certification • Obtained ISO 22000:2005 (Management system on ensuring food safety) Certificate • Obtained certification for Halal Food “We put priority on the test and research on their contents rather than the appearance of the products.”